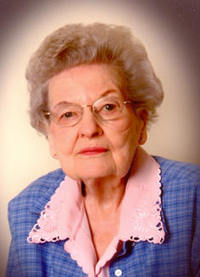 Dee was born in Wilson, Oklahoma to William Bryan Buchanan and Alma Jewel (Cornell) Buchanan on November 28, 1922. Dee was raised in Wilson, Oklahoma where she graduated from Ardmore High School in 1941. She was attending Murray State College in Tishomingo, Oklahoma when World War II began. Army bases were being built to train soldiers and they needed civilian personnel. Dee then went to work at Fort Howze in Gainesville, Texas, in the Finance Office, Accounting Section.Dee met Floyd Pahnish at Fort Howze. They were married on September 19, 1945. Dee and Floyd began their married life in Bozeman, Montana where Floyd resumed his education at M.S. U. Floyds studies took them to Moscow, Idaho, and then to Corvallis, Oregon. They then returned to Tucson and stayed until 1964. During this time their two children were born. They returned to Montana in 1964 when Floyd accepted a job as Superintendent of Fort Keogh Range & Livestock Research Station at Miles City. That began their many years in Montana. While the children were growing up, Dee was a stay-at-home mom. She later returned to college and earned an Associate of Arts degree from Miles City Community College in 1985. Dee also became an IRS Enrolled Agent and worked as an Income Tax Preparer for several years.

Dees interests over the years included family and friends, church activities, furthering her education and extension club as well as other organizations.