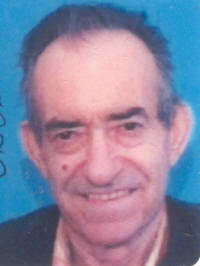 Visitation: will be from 11:00 a.m. until time of service on Tuesday at the Mt. Pisgah Cemetery Shelter

Joseph E. Sanchez passed away on Saturday, January 3, 2003 at Campbell County Memorial Hospital in Gillette, Wyoming from complications of a stroke.

He was born on June 3, 1931 in Bayonne, France. His family was French Basque and he had two sisters and nine brothers. At a young age, Joe was inducted into the French military serving for a while in Africa. Joe immigrated to the United States in 1953. Three of his brothers followed him to the states, two that resided in California and Julian who lived in Claremont, Wyoming. Joe herded sheep for Irigard Ranch in the Big Horn Mountains by Buffalo, Wyoming for a time. He worked for Husman Brothers Construction in Sheridan, Wyoming. On June 1, 1964, he married Dortha June Ward and they moved to Gillette, Wyoming in the mid 1960s.

Joe began driving truck for Divis Oil Company in 1969 and continued there until 1989. Joe retired in 1989 due to health reasons. He resided at Pioneer Manor from 1998 until the time of his death.

He was a member of the Eagles Lodge #186 of Sheridan, Wyoming. His proudest moment was when he became a naturalized U.S. citizen on January 21, 1983 in Cheyenne, Wyoming. Joe enjoyed playing cards and hunting and fishing in the mountains of Wyoming. Joes friends and family will remember his happy go lucky attitude, his friendliness and his willingness to help them with anything he could.

Joe is survived by several stepchildren including Darwin Ward and Joyce Philbrick of Gillette, Wyoming, Lonnie, Cecil, Roger and Charles Ward of Iowa and Joan Stockstell of Missouri.

He was preceded in death by his wife, Dortha and several siblings including Julian.

A memorial has been established in Joes name and may be sent in care of the Stevenson-Wilson Funeral Home 210 W. 5th St Gillette, Wyoming 82716.