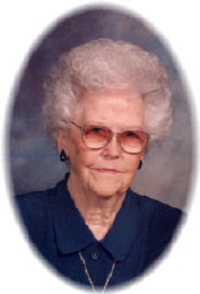 Marjorie "Marge" Lucille Urick, age 89, of Miles City, went to be with the Lord in Heaven on Friday, October 1, 2004 at her home in Miles City surrounded by the love of her family and friends.
Marge was born on December 29, 1914 in Hinsdale, Illinois the oldest of four children to Knute and Anna Martha (Sandstrom) Anderson. She grew up in northern Minnesota where she attended a country grade school near Grand Rapids, MN. She moved with the family to Coleraine, MN where she graduated from Greenway High School, Itasca Junior College and Business College in Duluth. Marge worked in Washington, D.C. and St. Cloud, MN for the Veterans Administration.
Marge married John Harris "Brad" Bradley in Brainerd, MN. They lived near St. Cloud for several years, and Patricia was born there in 1942. During World War II, Brad transferred as a machinist to Skykomish and Wenatchee, WA and Havre, MT, where Joan was born, then back to St. Cloud. In the spring of 1948, the family moved to Culbertson, MT and in July of that same year, Brad passed away.
Through friends in Havre, Marge got a job as secretary at the experiment station- the old Fort Assinniboine, and started working there in September, 1948. Marge was the secretary for all the office personnel including the Superintendent, M.A. Bell and Joseph Urick, who had started working there in March of 1948. As a romance started to gradually develop, Joe and Marge began a well- chaperoned "courtship" -- chaperoned by Pat and Joan. Joe gained the love of Marge and the girls, and they were united as a family on November 29, 1950 in a small church in Belt, MT. Pat and Joan were joined by brothers and sisters Joseph C. (Jay), Margaret Mary (Mary), Stephen (Steve), Katherine (Kathy) and Carol, and Marge stayed home to be a full-time mom.
In 1961, the family moved to the U.S. Range Experiment Station in Miles City where they have made their home since, raising their family. In 1965, Marge went back to work at the Veterans Administration Medical Center, and after 18 years of government service which began in Washington, D.C., she retired in 1980. Marge and Joe moved out to
Signal Butte in March of 1977, which became the gathering spot for many holidays. In 1990, they moved into town and enjoyed having a multitude of family and friends constantly filling the house with laughter, memories and love.
Marge will be remembered for her guidance, her loyalty to us, her unwavering unconditional love towards all of us and the paths we have chosen in life. She was a devoted Wife, Mother, Grandma and Friend. She taught us all that family and time spent together was far more important than anything money could buy. Marge was an independent woman who lived an exceptional life with great curiosity - she read all the time, she worked crossword puzzles every day and loved watching documentaries on television. Marge enjoyed documenting our family history by keeping photo albums of both sides of the family including photos of Joes ancestry and hers up through their great grandchildren. She loved rummage saleing, cooking and her most recent accomplishment. conquering the computer! Marge enjoyed e-mailing her family and friends back and forth through out the years. She will be sorely missed by all who were blessed to know her. We know she is one angel that finally got her wings.
Marge is survived by her husband Joe, of 53 years, of Miles City, MT, seven children; Patricia (Bob) Fuhrman, of Richland, WA, Joan Bradley of Olympia, WA, Joseph "Jay" (Connie) Urick of Hilger, MT, Mary (Fred) Wambolt, III of Miles City, MT, Steve (Jackie) Urick of Stanford, MT, Kathy (Rob) Bird of Bismarck, ND and Carol (Don) Switzer of Richey, MT, a close brother-in-law "Uncle Bob" Robert OClock of Auborn, CA, seventeen grandchildren and eleven great-grandchildren, numerous nieces and nephews and many wonderful friends that she considered to be family. Marge was preceded in death by her parents, Knute and Anna, a daughter, Kay Charlotte, brothers Clyde Anderson (in WWII)and Willard Anderson and her sister Myrna OClock.
If desired, memorials may be made in Marges name to the Holy Rosary Hospice; 2600 Wilson Street, Miles City, MT.