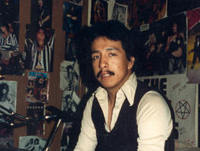 Roger was born to Raymond and Gloria Buckles on April 27, 1965 in Chicago, Illinois. Roger was raised in Poplar, Montana and attended grade school there. He attended high school in Salem, Oregon. He entered the Job Corps in 1985 and 1986 for the Culinary Arts and also got his CNA. Roger lived the last ten years in Spokane, Washington. He worked at The Gardens, Franklin Hills, Hollywood Manor and Alderwood. He loved his job and really cared for his patients. He enjoyed fishing and bead work, spending time with family and using his cooking skills on family and friends.

Roger was preceded in death by his father, Raymond Buckles.

Viewing will be until midnight, Friday, May 4, 2007 with a Prayer Service at 7:00 p.m. at the Cultural Center in Poplar. A Funeral Service will be held Saturday, May 5 at 2:00 p.m. at The House of Prayer on Highway 2 in Poplar. Rev. Verle Follette and Pastor Danny Lindsay will be officiating. Interment will be at the Poplar City Cemetery with a lunch following at the Cultural Center