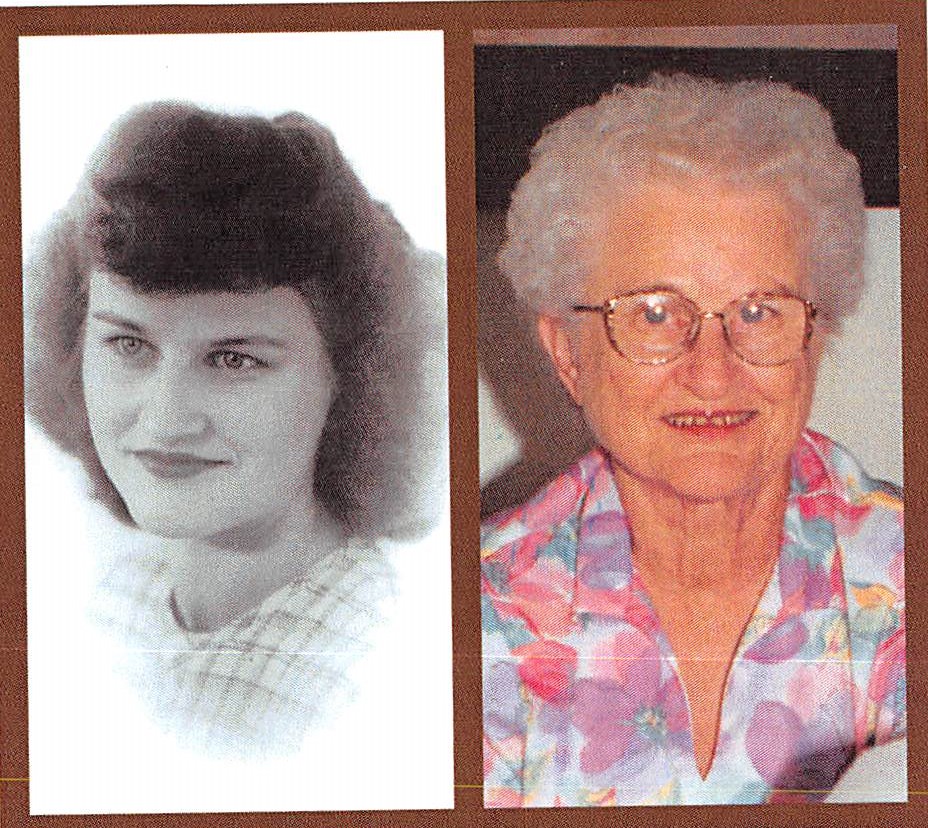 On October 13, 2021 a double burial will take place for Anne and her husband, Edward.

Anne Maria Jonutis (née Kierzek) passed away from natural causes, surrounded with love, in Billings, Montana, September 19, 2021.  Although her husband would refer to her as Anna, friends and family knew her as Anne – and good luck to anyone forgetting to spell her name without the “e” at the end.

Born in Dickinson, North Dakota, on April 23, 1925, Anne was the middle daughter of three born to Michael and Isabelle Kierzek.  Her family farmed in the small and tight Polish community of St. Philip, a few miles south of Wibaux, Montana.  Anne remembered wheat blowing in the wind, the barn where she and her sisters and cousins played, pumping water from the household well, and turning the handle of the blower on her father’s forge as he worked. There were also memories of walking to her country school and to the church just up the hill from the family home.  A strong memory of winter was of her uncle coming by with his children in a horse-drawn sled and how he used heated bricks and blankets to keep everyone warm.

During these years Anne received piano lessons in Beach, North Dakota.  Her music teacher accepted vegetables, cream, eggs and other farm produce as payment.  By the age of ten, Anne was a regular St. Philip church organist as well as singing in the choir.  She attended Wibaux County High School, boarding at the Milton Hotel during the week and riding home in the family’s Model T Ford on weekends.  The old Ford was only a little better than the sled and heated bricks were still necessary.  Anne graduated from high school in 1942.

Anne was employed by the J.C. Penney Company in Beach, later becoming a secretary for the county agent in Wibaux.  Her father died in a tragic accident when she was 19, giving her mother no choice but to sell the farm and move to Miles City, Montana, to live with a relative.  Anne moved with her mother and took employment with the Custer County Clerk and Recorder’s Office.

In 1946, Anne and her mother were enjoying a meal at the popular Alta Club in Miles City when a young man named Ed Jonutis, recently home from serving in WWII, asked Anne to dance.  Ed and Anne were married in Miles City on February 12, 1947, moving shortly thereafter to Glendive where Ed was employed with the Montana Highway Department.  They lived in a small trailer for several years and eventually purchased several acres of land north of Glendive where they built their first, and only, home.  They brought four children into the world between 1947 and 1958.

Through her work with the Agricultural Stabilization and Conservation Service in Glendive, Anne won a trip for herself and Ed to Washington, D.C.  After retirement, Anne and Ed started “Country Auto Sales” in their horse pasture and ran this business successfully for 20 years.  They traveled to visit their children who lived as close as Billings, and as far away as Massachusetts, West Africa, and Australia.  Anne also enjoyed a cruise exploring the coast of Alaska with a friend.

Although Anne was a creative sketch artist, great cook and seamstress, her passion was music.  She became the organist for the Sacred Heart Church of Glendive and sang in the choir there.  She entertained on the piano as part of the Over the Hill Gang, the Mellowtones, and the Lemon Sisters.

Anne and Ed celebrated 70 years of married life before Ed passed away in 2017.  Anne was preceded in death by her sisters Agatha and Loretta.  She is survived by her children, Bobi (Gene) Allard, Stan Jonutis, Jo Anne (Gary) Herem, and Jim (Donna) Jonutis, four grandchildren and two great-grandchildren.

The family greatly appreciates and would like to thank the kind and wonderful people at Lasting Legacy Assisted Living who cared for Anne during her last years.  Hugs of affection go to special people of RiverStone Hospice.

The family is planning a private Catholic service and double burial at the Eastern Montana State Veteran’s Cemetery in Miles City at a later date.  Stevenson & Sons Funeral Home of Miles City will be making those arrangements.