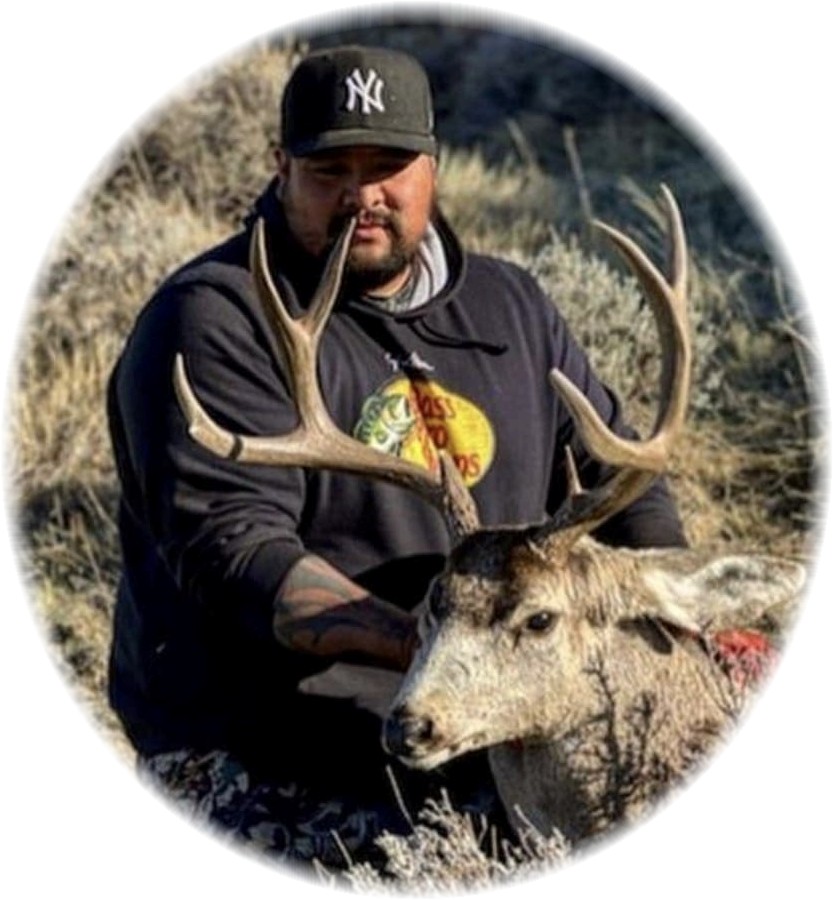 The proudest Northern Cheyenne/Blackfoot fisherman has gone to the best fishing spot in heaven.

As much as we wanted Chan to stay with us, he accepted the calling of God. He was needed in Heaven to stand along the side of God.

Chan was born during a snowstorm to Sandra Bruised Head on November 26, 1988.

Chan was raised on the Northern Cheyenne Reservation, roaming the hills of Cheyenne Country.

Chan also spent his summer’s in Canada with his Papa and Granny. He was a Canadian at heart.

My son was a gentleman, he had a big heart. He had such an impact on so many people. Everyone has a Chan story. I don’t know how to write my son’s obituary. So if I failed to mention your name please forgive me.

Chan went to school at St. Labre and graduated from St. Labre in 2007.

Chan was always working on vehicles, rebuilding motor’s, rebuilding motorcycles. He loved being a mechanic. His proudest creation was “Kooter Brown” This black truck was the loudest, you just had to listen outside and you can hear it cruising anywhere in Lame Deer.

Chan met his high school sweet heart Lindsey Whitewolf, They were married on February 14,2008. From this marriage they were blessed with 2 babies Hailey Jo and Carson Ross. They were later divorced.

Chan had another relationship and from this union they had a son Bentley Jordan.

Chan was a hard worker, he worked to support his family. His kids were always on his mind and heart.

His employment started out at the IGA at the young age of 16, the sound of his voice telling his first day of work story was a truly proud moment for him. He also worked for the Charging horse Casino, then onto being a ranch hand for the Gilliand Ranch. Chan did some spot job’s just to be employed. Chan was also employed by Western Energy for a few years.

He was a stock contractor for the Bruisedhead bucking bulls. In 2018, Chan met Rhonda and moved down to Phoenix, Arizona. He then started working for Berge dealership as a mechanic. Soon after he realized his heart was with heavy equipment machinery. After many phone calls of begging Chan to work for Empire CAT, he finally accepted the job. He was then sent out to Morenci Mine located in Morenci Az. He then moved his little family to Safford, Az to be closer to work. On November 26, 2019 on his birthday he married the love of his life, Rhonda Bruisedhead. Two months later they were blessed with their baby girl Nevaeh Rose. On Fathers Day of 2020 he was baptized through Christs Church of the Valley located in Chandler, Az. Chan absolutely loved fishing, he would always take his boat out on his days off, he collected dozens of fishing poles and boxes filled with fishing supplies. He also enjoyed going to the gym right after working a 12 hour shift and right after fishing. He also started a Youtube Channel and became a Native influencer. He enjoyed making fishing and hunting videos to show his family back home what he’s been up to. About mid January he tested positive for covid. Days after he was admitted into Safford Medical Center and within a week he was flown to Tucson Medical Center and was placed on a ventilator and put into an induced coma. On January 25th, he went on to be with the Lord.

The Bruised Head Family is very large and too many to mention.

His paternal side his dad Leland Russell and his sister’s Jayme, Peyton and Chontay.

My son, my ninja turtle, my baby boy I will love always, you broke our hearts. We will miss you, we are in comfort knowing that you are at the gates of heaven with your big smile and your fishing pole.