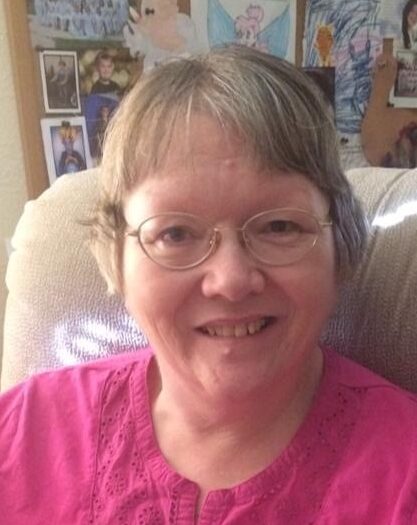 Just after midnight, on September 9, 2022, Debbie passed away at Holy Rosary Healthcare in Miles City, MT after succumbing to injuries sustained in a fall. She passed away with her loving husband Ken at her side. She was 70 years old. She was a mother, friend, wife, grandmother, and breast cancer survivor.

Debbie grew up in the Turtle Mountain area of North Dakota, calling Dunseith home, just 20 minutes south of the International Peace Gardens.
Debbie loved animals- many of her stories about her childhood included trying to bring home any ‘stray’ animals she came across. Her tender heart just grew as she did. She graduated from Dunseith High School in 1970. After graduation, she attended North Dakota State University- Bottineau Branch (now known as Dakota College at Bottineau). She was roommates with her life-long friend Collette. She was described as a free spirit.

When Debbie decided college wasn’t the path for her, she moved to Fargo and worked. She worked in a nursing home for a while, also waitressed. She moved to Baker, MT, and was a waitress in 1979, when she met her future husband, Kenneth Marmon. After a whirlwind romance, they welcomed their first child, a daughter named Klista Jo in 1980 while living in Williston, ND. Just a year later, they moved to Terry, MT, where they would live for another 6 years. Their first son, Kenneth Zachary (Zack) arrived in 1983, followed by son Lucas Dennis in 1985, and finally daughter, Kelsey Lynn, in 1988.

As Ken worked, she became a stay at home mother and quickly taught herself many domestic skills, including growing a beautiful garden. She learned how to can her garden harvest and learned how to cook for a hungry family. She would talk to her friend Collette on the phone, often giggling at how ‘domesticated’ she had become.
In 1986, Debbie started attending the Wesleyan Church in Terry, MT. While there, she found a deep love for her faith. She accepted the Lord as her savior, and her church family as her circle.

After moving to Miles City, MT in 1987, she began to attend the Miles City Wesleyan Church. While there, she met some of her dearest friends. She was very active in the church, helping to begin the annual Easter program that so many have attended over the years. She also helped organize and chaperone many youth ministry events.
Debbie would invite almost everyone she ever met to come to church. Her love of cooking just grew during these years. She treasured the pot luck Sunday that took place regularly. Many of her cookbooks where marked with the next thing she would make. Every morning, you could find Debbie listening to her favorite gospel music while doing her daily devotions. Her bible was never far from her reach. Sundays were her favorite day of the week. Church and then football! Her love of football was astounding. She could recite stats and names like the most knowledgeable sportscaster. She always said her dad taught her all things football.

Debbie was also very in tune to the political side of life. She was very informed about all things politics, and wouldn’t mind having a friendly debate if the situation arose. She also loved to create. She took painting classes and would often hand paint Christmas decorations for friends and family. She also loved to cross stitch when her children were small. Many of her pieces are still displayed in family homes.

In August of 2008, Debbie finally decided to have a surgery that would help her enjoy her life and grandchildren- she had 3 already, and 3 more were on the way soon! She wanted a hip replacement so she could play with those precious kids. Unfortunately, God had other plans for her. The day after surgery, Deb suffered a massive stroke that left her unable to speak, and severely weakened the right side of her body. While her mobility was impacted, she still tried to go places when she could. Her husband Ken, changed his work routine and became as much of her support system as possible. He was always there, watching TV with her, bringing her treats, and just being that partner we all dream of. His love and devotion stayed strong and true. He was there with her as she took her last breath.

Special thanks to the caregivers at Homestead Assisted Living, where Debbie lived the last 10 years. Thank you for taking care of Debbie every single day. We appreciate you all. The palliative care team at St. Vincent, and the hospice team at Holy Rosary- thank you for making Debbie as comfortable as possible until her passing. We all thank you from the bottom of our hearts.