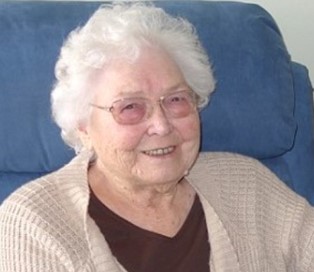 Evelyn Casterline, wife, mother, grandmother, godmother, farmer, saleswoman, and friend, passed away peacefully on October 17, 2020, at McCone County Nursing Home. Evelyn Jeanette Casterline, nee Marsh, was born on October 11, 1926 to Raymond and Ruth Marsh in Circle, Montana. Fondly referred to as “Evie,” she was the third of four daughters to join the Marsh family. Evelyn was raised to believe that women could do anything that men could do, and in the Marsh household, that was the expectation. Evelyn’s childhood taught her to be tough, hardworking, and strong—all traits that she embodied for her entire life.

Evelyn attended elementary school at both Cow Creek School and Wolf Point Elementary School. Attending school sometimes meant traveling to Wolf Point and staying for the school week, while her parents stayed at the farm. Evelyn would later recount helping shovel the Cow Creek road so she and her sisters could get through the snow to school. Evelyn graduated from Wolf Point High School in 1945 after which she helped her father on the farm and worked at a bakery in Wolf Point. She kept in touch with her high school classmates throughout her life, and in her later years, she met with them every month.

Evelyn met Keith Casterline at the Vida roller skating rink, and they were married on November 28, 1951 at the Vida Baptist Church. The couple had four daughters and Evelyn helped Keith farm near Vida for approximately 60 years. In addition to raising four energetic daughters, Evelyn was committed to working as much as she could on the farm. Even into her later years, Evelyn could be found driving tractor and truck, and picking rock out of the fields. On top of this workload, Evelyn worked with ceramics, bowled, sewed, and worked in the garden. One could often find Evelyn mowing with a hat on her head and a look of determination in her eyes.

In addition to keeping busy with farm work, Evelyn took over her daughter Lana’s Avon business following Lana’s passing in 1972. The area that Evelyn served stretched from the Missouri River to Cow Creek, and she was devoted to her customers. Every month, she would pack her basket full of Avon products and visit all of her customers to make some sales, catch up on her neighbors’ lives, and drink a substantial amount of coffee. Every holiday season, Evelyn would host an open house for Avon customers to come to her home to peruse the available Avon products. In preparation, Evelyn would bake enough cookies and sweets to feed a large army, and her customers left with exceptionally full stomachs.

Evelyn was also an active community member. She was a member of the Vida Baptist Church (later known as the Vida Community Church) and the Vida Homemaking Farmerettes. As the head of Disaster and Emergency Services in McCone County, she created and instituted the call tree to help spread the word of approaching dangerous weather after a frightening tornado hit Vida. She was president of the McCone County Democrats for a number of years, and she taught Bible school and Sunday school. She was appointed to the Montana State Banking Board by former Governor Brian Schweitzer, and she was involved in the Montana Farmers Union. She was well known for diligently sending birthday cards to everyone in the community, and friends and family often commented that Evelyn never forgot their birthday. She also loved to accompany Keith on trips that he would take on behalf of McCone Electric.

Evelyn was unfailingly genuine and she spoke her mind without hesitation. She was a fierce competitor and she loved all kinds of games and sports. Evelyn had a “take-no-prisoners” approach to board and card games. She relished teaching her family members to play card games just so she could swiftly beat them at the game they just learned. She was also a devoted fan at her family members’ sporting events, and she was a loyal Minnesota Twins fan who regularly traveled with her family to Minneapolis to see the Twins play.

Evelyn was highly skilled with embroidery needles and crochet hooks, and she religiously planted petunias in her flowerbeds, often with the help of her grandchildren. She was a master pie baker, and she made sloppy joes as the main dish for the family gathering that took place at her home on New Year’s Day every year. She loved holidays, particularly Halloween during which she and Keith would write down the name of every trick-or-treater who came to their door just so they could know all of the children in the community. She baked cookies in owl shapes (with cashew beaks—if you received one, you remember what it looked like) every Halloween, and gave the cookies as treats. She was a gifted singer, and she was also typically the loudest singer wherever she went. At church, one could always hear Evelyn leading the congregation and confidently hitting the high notes during songs like “Amazing Grace” and “How Great Thou Art.” Evelyn liked to drive fast on empty country roads, and she loved Sunday suppers of waffles and sausages with her family gathered around the kitchen table. Her hearing was impeccable, and even when she appeared to be sleeping, she could hear a whisper 50 yards away.

Evelyn was quick to laugh at a good joke, and her giant grin was unforgettable. She taught her family to be authentically themselves, and to not take themselves too seriously. She gave the best hugs and the loudest, wettest kisses. Her astonishing strength, vibrant energy, and undying love for her family and friends will not be forgotten.

Special thanks to the wonderful nursing staff at the McCone County Nursing Home who provided invaluable care to Evelyn for many years. In lieu of flowers, the family requests donations in Evelyn’s memory be made to the Alzheimer’s Association to help advance critical research toward treatment, prevention, and a cure for Alzheimer’s and other dementia which tragically affected Evelyn in her later years.

She will be sorely missed and survived by sister Rae Murphy of Circle; daughters DeeAnn Urton (John) of Vida, Faye Speer (Marc) of Circle, and Joni Casterline (Sue Smith) of Portland, OR; granddaughters Kama Urton (Teddy Nadaskay) of Circle, and Raina Urton of Minneapolis, MN; grandson, Dalton Speer of Bozeman; godchildren Curt Casterline of Norman, OK and Amy Casterline Newman of Laurel, MD; many nieces and nephews and cousins, and her beloved cat, Blaze. She is preceded in death by her parents, her husband, Keith, her sisters, Marian Laubach and Dorothy Tingler, and her daughter, Lana.

A memorial service is being planned for a later date.