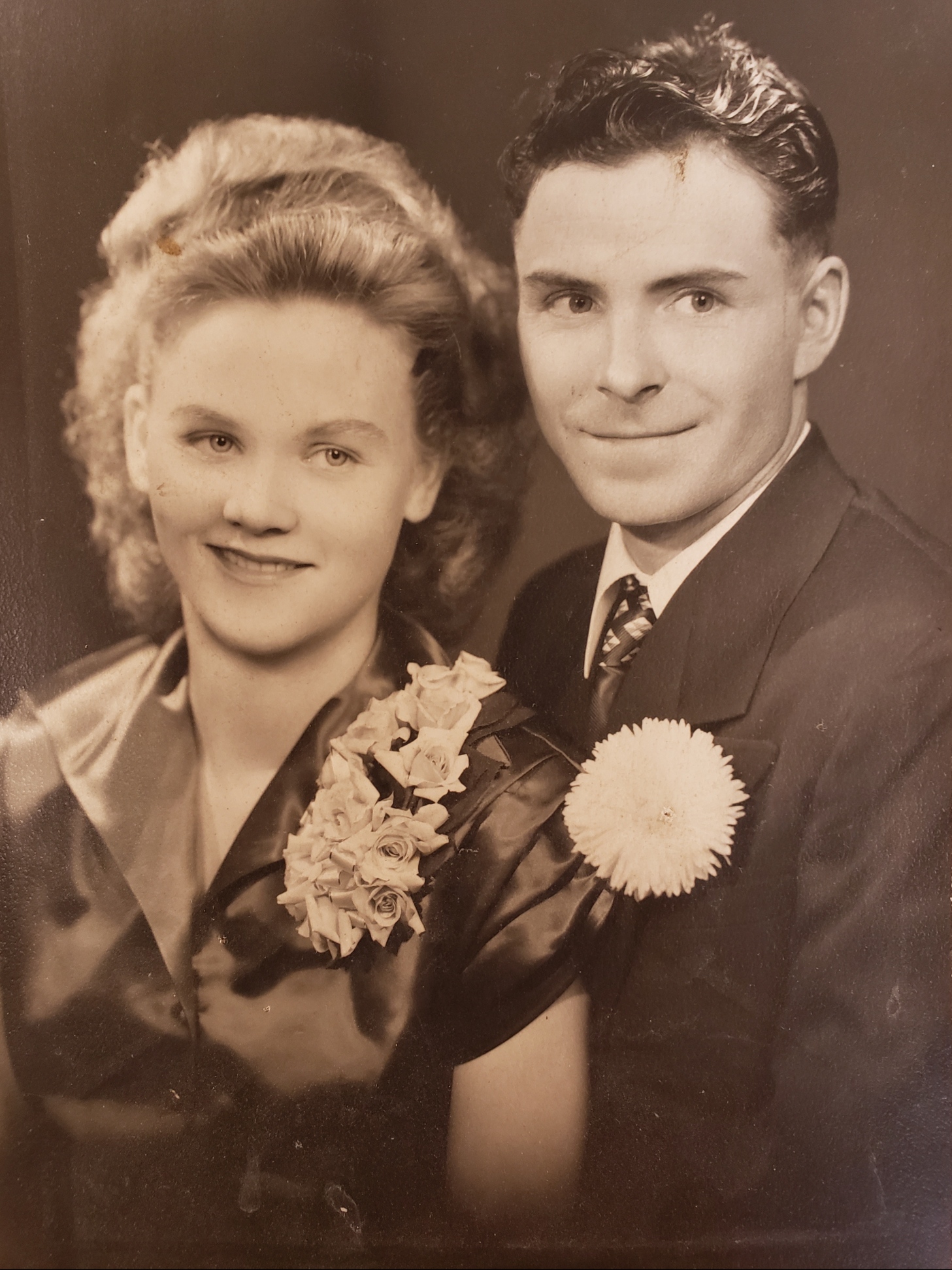 Freda Faye Stinebaugh, 86, passed away in the early morning hours of June 15, 2019 at Billings Clinic hospital in Billings, MT, held in the arms of her granddaughters, Melanie Brown and Chevell South and surrounded by a family that deeply loved her.

Freda Faye Nordahl was born to Oscar and Mable (Wangsness) Nordahl in a cabin at Mosby, MT, on February 5, 1933. She grew up at the mouth of Calf Creek on the Musselshell River with her 2 sisters, Alice and Margit, and a brother, Raymond. She then attended High School in Jordan, graduating in 1950. She stayed in the dorm while attending high school.

There were not too many conveniences in her childhood, but Freda and her siblings made their own fun and never lacked for anything to do. They did lots of horseback riding and had cows to milk and chickens and pigs to feed and mastered the art of making mud pies. The kids did lots of sleigh riding in the winter, played cards and dominos. She learned how to hoe at an early age as they had a big garden every year. Trips to town were seldom, but when they did go, they went to Winnett.

On September 1, 1950, Freda married Roy Stinebaugh at the Presbyterian church in Miles City.  They made their home on a ranch north of Jordan near Hell Creek. Roy and Freda were married for 62 years when Roy passed away in 2013. Roy and Freda farmed and raised cattle and sheep and had 2 daughters, Shelley and Rhonda.

When Roy and Freda’s first grandson, Ken Ryan was born, they were thrilled and spent every waking moment doting on him. They were overjoyed to have him around. Those were special years for both of them.

She was a very early riser and it wasn’t unusual for her family to wake up to the smell of something baking. Freda received a friendship muffin starter in 1986 and had continued it to this day. Freda was a wonderful home-maker and the best cook ever. Anyone who ever visited Roy and Freda always had a delicious home-cooked meal which usually included a selection of desserts. She would spend days baking and preparing food for holidays, brandings and docking crews.

Freda was organized and timely in everything she did and had beautiful handwriting. She liked numbers and kept everything in order. To say Freda enjoyed crosswords would be an understatement, she was a whiz at them. Mom had a strong faith in the Lord that sustained her. At the crack of dawn, she always studied her bible, journaled and had quiet time with God.

Freda shared a love of white butterflies with Chevell South and a love of rainbows with Ashley Mothershead. Ashley saw a double rainbow shortly after her passing.

Thank you to the doctors and nurses at Billings Clinic who cared for mom and the many prayer warriors who prayed for her. A special thank you to Mom’s dear friends Judy Bollinger and Rhoda Phillips for everything you have done for mom. Another big thank you to nephew Roger Fogle for being a rock in mom’s final hours.

Freda is survived by her daughters Shelley (Tom) Ryan of Jordan and Rhonda Mothershead of Wickenburg, AZ, 2 sisters, Alice (Kenny) Fogle of Jordan and Margit Laws of Eagle Creek, Oregon, 4 grandchildren, Ken Ryan of Jordan, Chevell (Kent) South of Jordan, Melanie Brown of Great Falls, Ashley Mothershead of Alexandria, VA,  a special nephew, Will Stinebaugh and his wife, Melissa Stinebaugh of Perry, Georgia and their sons Hayden and Aaron, a special nephew Jack Hedstrom and his wife Sharon Hedstrom of Miles City, MT and their girls, Jannell, Shannon and Shelby and 7 great-grandchildren.

She is preceded in death by her husband Roy, a great-granddaughter, Kortni South and her brother Raymond Nordahl.  Say hello to Daddy and Kortni for us. We love you and miss you always.

Donations can be made to the Garfield County Ambulance Fund.

A private family service will be held at the Stinebaugh Family Cemetery at a later date.

“Jesus said to her, I am the resurrection and the life. The one who believes in me will live, even though they die; and whoever lives by believing in me will never die. Do you believe this?” – John 11:25-26