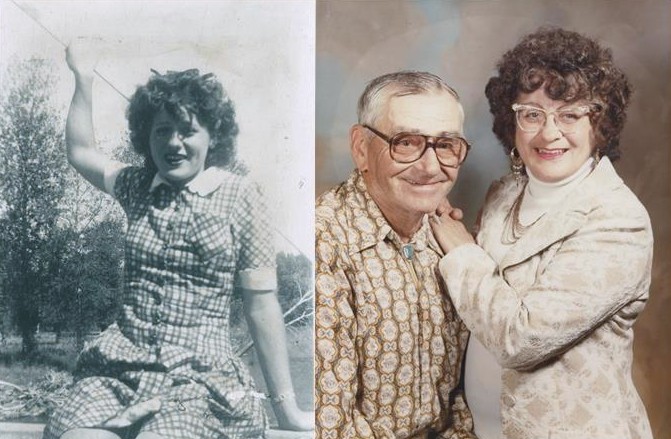 Earline “Helene” Shandy Brown, age 87 of Forsyth, passed away on September 20, 2014 At the Rosebud Healthcare Nursing Home. She was born November 30, 1926 in Hot Springs County, Wyoming, the ninth child of ten, to Charles and Grace (Willis) Shandy.

Growing up on a ranch in Bridger and Joliet, Montana Helene loved riding her horse Whiteman and helping her dad on the ranch. She married Raymond S. Brown in 1944 and moved to his family’s homestead on Rosebud Creek. Later they moved to Slaughterhouse Creek in Forsyth where she was the happiest, tending her flocks of chickens, turkey, ducks and geese. There Helene enjoyed entertaining her family with her guitar and singing.

Later they moved to town and Ray and Helene started the 2nd Hand Store in Forsyth and operated it until Ray’s death in 1988. Helene enjoyed visiting and helping people she met while running their store. She enjoyed repairing furniture and appliances, upholstering furniture, making dolls and dolls clothes. Helene was very good at upholstering and upholstered many chairs, car seats or anything that looked like it needed it. She loved her dogs and cats and always had a special place in her heart for her cat Snoopy.

Helene was always there when her children needed someone to watch the grandchildren or needed some help. She kept her home open to her grown children many times while they searched for their own homes. She loved going to Joliet to visit her sisters and brothers and their families.

She was baptized in the Concordia Lutheran Church in Forsyth and was a lifetime member of the Ladies Auxiliary VFW.

No services are planned. Burial will be in Joliet, Montana in the Shandy family plot. Graveside services and prayers will be Thursday, September 25, 2014 at 1:00 p.m.

In lieu of flowers, please send donations to The Rosebud Foundation, Box 500, Forsyth, Montana 59327 or the Forsyth VFW Auxiliary.

Stevenson and Sons Funeral Home of Forsyth is assisting the family with these arrangements and condolences may be sent by visiting www.stevensonandsons.com