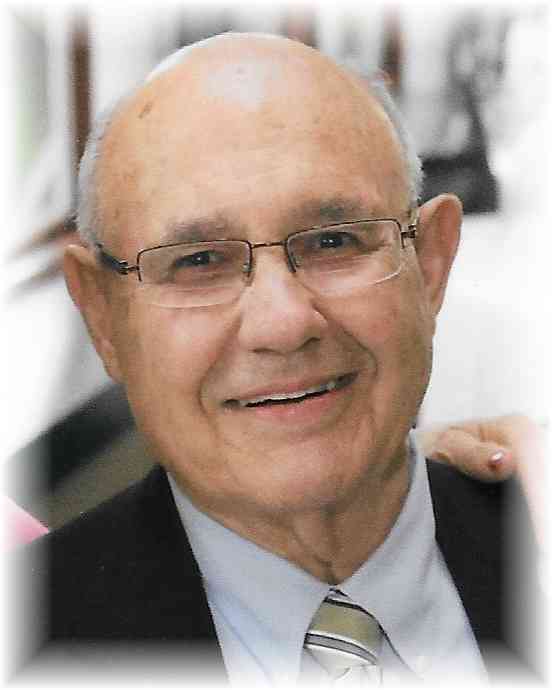 Scroll to the bottom to watch Jim’s Video. If you would like a Memorial Folder, feel free to stop by the funeral home to pick one up.

James P. Lucas, age 93, passed away of natural causes on April 10, 2020, nine months to the day after the passing of his beloved wife Carol, with his daughter by his side. Jim was born April 7, 1927, in Worland, Wyoming. When he was six months old, his family moved to Miles City, Montana. He was the oldest of five children born to immigrant parents; his Dad Pete from Greece and his Mom Helen, from Germany.

Jim graduated from Custer County High at the age of 16, attended Miles Community College, and then transferred to the University of Montana until he was drafted into the Army. He was stationed at Headquarters in Ft. Sill, Oklahoma as an Artillery Specialist and Military Intelligence Officer until the end of WWII. During this time he was active in Army Athletics including basketball, heavyweight boxing, and he pitched for the 4th Army All-Star Team. After honorable discharge in late 1946, he resumed college at the University of Montana where he became a proud member of the Sigma Nu Fraternity, was UM Student Business Manager, competed at the National finals at West Point for the Debate Team, and played varsity basketball and baseball. Jim received his Bachelor of Arts in 1949, Bachelor of Arts in Business Administration in 1950, and his Juris Doctor in law in 1951.

Jim’s first love was the game of baseball. He was active in American Legion as a pitcher for the State Championship team in high school, and, while attending the University of Montana, Jim spent nine years playing semi-pro baseball with teams in the Northwest and the Canadian League. He was eventually extended an offer to join the Brooklyn Dodgers. He reluctantly turned down the offer, choosing instead the stability of law.

He loved Miles City, and Montana, and was committed to serving its communities, so he returned home upon graduating from law school and entered the legal profession as a partner in the Leavitt and Lucas law firm. He was elected Custer County Attorney, and served in that role for ten years. He believed strongly in education and worked tirelessly for Miles Community College where he served on its Board of Trustees for 59 years, including serving as President of the Endowment. He was appointed Charter Member for the National Fund for Improvement of Post-Secondary Education and received the Regional Trustee Leadership Award for the Western Region of the U.S. in 2008. He was extremely honored when he learned that the Administration Building at MCC was to be named the James P. Lucas Hall.

In 1963, Jim was elected to the Montana House of Representatives where he served five terms and was Speaker of the House from 1969-1972. It was here that he met and fell head over heels for Carol Dunstan, a Butte native working for the Legislative Council. They met in January 1965 and were married July 10, 1965. An avid Grizzly fan, he served as Past President and Trustee for the University of Montana Foundation Board for 27 years, the Alumni Association for 69, and was awarded the University of Montana Distinguished Alumnus in 2000.

Jim got his pilot’s license in order to travel throughout the state and the West. He pursued his passion for flying in his Cessna N46JR. Always active locally, Jim could often be seen delivering apples for Kiwanis and Meals on Wheels, cashiering at the fair booth or taking his turn at the Elks Auction. A devout Methodist, Jim served on numerous committees and remained active throughout his life. He served on many Boards of Directors for companies such as Montana Power, USWest, the Mountain States Legal Foundation, the Montana Chamber of Commerce, Burton K. Wheeler Center at M.S.U., Entech Energy Company, and many more.

He announced his retirement in 2009 as senior partner of Lucas & Tonn P.C. Law Firm, but he couldn’t stay away from the law and continued practicing full time until he was 87, when health concerns forced his true retirement. Most of all, his greatest love was Carol, whom he called “my sweetheart”. She was his partner and his foundation, who stood by him, took care of him and, along with his kids, made his life joyful. She passed away on their 54th wedding anniversary last July.

Several weeks before his passing he told his daughter that he wanted people to know that “he gave thanks every day for his full, wonderful, meaningful life and was filled with deep love for his wife and family, and all the circumstances which allowed him so many great experiences and accomplishments. For the recollections of the many moments of humor, excitement, travel, adventure and dear friendships. These memories sustained him throughout his absence from Montana the past several years and for that he was incredibly grateful. He held great love of the state of Montana, his community and the United States.”

Jim touched many lives. He had a keen intellect, a great sense of humor, an infectious laugh, sparkling eyes, and an immense strength of character. He will be dearly missed. He leaves behind; James II (Holly) of San Antonio, TX; Mark (Rachel) of Carmichael, CA; Leslie of Winter Garden, FL; Todd (Robbi) of Winter Garden, FL, 11 grandchildren, and 5 great-grandchildren. He was preceded in death by his wife Carol, his parents and four siblings, Don, Dorothy Ann, Betty, and Bob.

Memorial gifts may be made to the Miles Community College Endowment, the Miles City Methodist Church, and the Range Riders Museum, or the charity of choice.

Public funeral services will be posted as soon as state and local officials lift the social distancing  requirements as well as travel restrictions in our area due to  COVID-19.