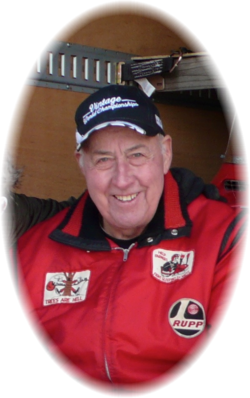 While attending college Jerry met the love of his life Patricia Light. They married on August 24, 1957 in Great Falls. Jerry and Patricia lived at Big Sandy for five years where they started their family. He worked on his uncle Ernie Geyer’s farm, honing his farming skills which was his real passion in life. They then moved to Havre to farm for Mrs. FJ Nichols for just two years. The family moved on to Buffalo, MT in 1964 to farm and ranch for Ralph Lee for six years. This was when his love of snowmobiles was born; his first snowmobile being a 1968 Scorpion.

They moved to the Hobson community in 1970 when Jerry went to work at the Yogo Sapphire Mine. This was a cherished time for Jerry as he was able to spend many weekends camping and snowmobiling with the family in the mountains of Central Montana. In 1973 he leased the Fred Brading cattle ranch west of Hobson at Philbrook. He saw this as an opportunity and put all of his energy into it, while still working at the mine. During these years the family was involved in many activities including square dancing, the fair, 4-H, FFA, camping, snowmobiling and school sports. A deep connection with the community was forged.

While at Hobson, Jerry was afforded the great opportunity to manage farms for DuBeau Nessan Farms of Billings. In 1980 a move to Forsyth was necessitated in order to oversee more than 30,000 acres of farm ground between Hobson, Forsyth, Angela and Livingston. He enjoyed the large-scale farming operation, the chase, the adrenaline rush of accomplishment and a job well done. DuBeau Nessan Farms ceased operations in 1984 succumbing to high interest rates, high gas prices and drought, forcing Jerry to buy his own business in 1985. He bought Big Sky Service from Warren Becker, going on to successfully operate a full-service gas station, car wash, automotive service and tire sales business for 25 years. During this time he also purchased the Kwiki Car Wash from Charlie Harris.

Jerry thoroughly enjoyed Forsyth and Southeastern Montana. Jerry and Pat enjoyed countless long drives discovering and admiring the diversity of the people and the region. Many friends were made.

In the early 90’s his love of snowmobiling became more pronounced through buying, selling and collecting vintage snowmobiles. He thoroughly enjoyed the hunt to find the next sled, and most of all, the lifelong friendships he made with other snowmobile enthusiasts throughout the country, especially Minnesota. He was proud to count among his friends Edgar Hetteen (founder of Polaris and Arctic Cat snowmobiles) and Richard Harrison (founder of Scorpion snowmobiles). He was a longtime member of the Vintage Snowmobile Club of America (VSCOA). He remained passionately involved in this hobby-turned-business up until the time of his passing.

Jerry was extremely proud of his entire family. He worked hard to support his family and instilled a strong work ethic in his children. Fond memories were made while working hard and playing hard.

Jerry was preceded in death by his parents Frank and Grace (Geyer), and brothers Nick and Dave.

In lieu of flowers, memorial donations can be made to:
The Rosebud Foundation, PO Box 500, Forsyth, MT 59327