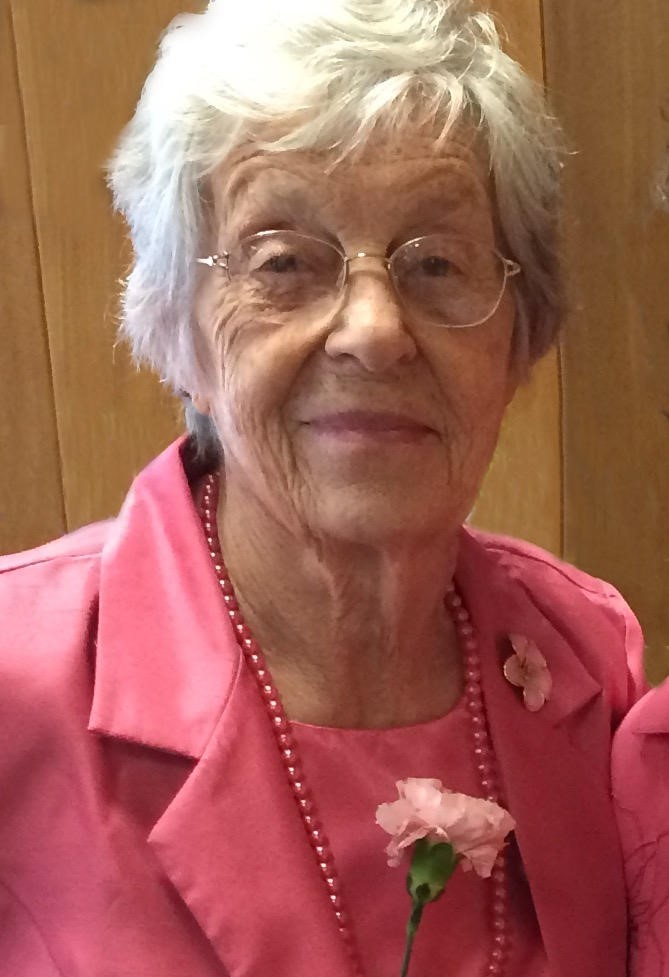 After 88 laps around the sun, at the intersection of Covid19 and Alzheimer’s, Joyce D. Almy left this life for the next on Monday, July 13, 2020.

She was born in Dupree, South Dakota to William Jacob and Elizabeth Jenny (Jeffries) Ochsner. She attended school in Dupree and was active with music and drama in high school. Upon graduation in 1950, she attended a summer of college and immediately began teaching at a one-room school near Eagle Butte, SD. As her father dropped her off at her new job, she said she cried, “How will I teach the little ones to read?” –but she did!

The following school year, she taught at Albion, Montana. Shortly after her arrival to the neighborhood, she collared some locals including a young cowboy from the Bud and Maxine Enerson (Jim Oliver) ranch to perform in a school play. He was smitten and by that Thanksgiving in 1951, they became Mr. and Mrs. William Ellery Almy Jr. They continued to live in the Albion area on the Davenport place and her many roles soon included being a mother when William E. Almy III was born in 1952, Curtis Thayer Almy in 1954, and Dawn Darlene Almy in 1957. Elizabeth Ann was born in 1963 after the family moved to Ismay, purchased the Hamilton brothers’ ranch, and began operating it as Keystone Ranches, Inc.

Each Sunday morning was spent in church and even when cow-calf pairs needed to be trailed at 5 AM, Joyce would go out about 3 hours later to the fresh pasture and children would dismount their horses to ride in a warm pickup truck, headed to church. “The children will not miss Sunday school and church!” Joyce would say. More than just taking them to Sunday school and church regularly, she, The Mother, taught her offspring about our Heavenly Father and reminded them almost daily that faith requires constant attention and effort. She loved to teach the Word to anyone and was a gifted instructor. Her faith never faltered and she sang hymns with her children until she passed.

Music was an essential part of Joyce. She started piano at a young age and played tuba in high school. She played piano and organ for church and directed church choirs. On summer days music would float from the grand piano out the window to the Quonset and Bill nicknamed her “Joyous Joyce”. Music was woven into the fabric of the family to become an integral part of the heritage.
If there was ever a situation where an actress was needed, Joyce was there! Her quick wit coupled with humor was infectious when she was given an audience; do you recall Clarabella Nussbaum’s weekly Baker Livestock market report? Perhaps the livestock prices weren’t great, but she somehow found a way to make folks chuckle and tune in to listen.
Joyce loved a good party. Tupperware party, Rubbermaid party, Tiara party, and even a jewelry party. She earned a nice supplemental income as well as national recognition for her “party plan “ sales. At the urging of Bill, she passed the state insurance exam and sold life and health insurance for Bankers Life and Casualty.

Later in life she enjoyed flower gardening and weeding…and weeding…and weeding. No matter where or when, she saw ‘em and if there was time, the weeds got yanked. Her children’s lives were “gardens” to be tended, even into adulthood if she saw “weeds” in their lives, she had a comment or two! She had an eye for the end result, the harvest of the fruit of the garden. This explains why she chose to teach in every congregation in which she found herself. It also explains her sincere interest in everyone everywhere, even during her last year spent at a memory care facility.

The end of each of our lives is nearer today than it was yesterday. May we all who knew and loved Joyce check over the gardens of our own lives to see if they could stand some water, fertilizer, or weeding.

Due to heightened Covid19 safety concerns, a private family burial service will be held at Custer County Cemetery. We are forever grateful for the loving care afforded Joyce at Canyon Creek Memory Care. We pray for the strength of the staff as they continue to love and care for others during these unprecedented times.