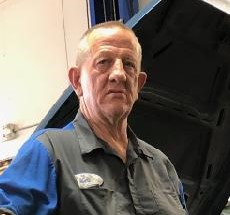 Les bravely and valiantly battled health issues for the last several years and was holding his own until demon Covid-19 came to call. On the evening of November 23, 2021, with family at his side, the angels came to accompany Les on his journey Home for a well-deserved rest.

On August 5, 1960, Leslie Leigh Church was born in Forsyth, Montana to Ethelyn and Charles Church. At that time, the family lived in the area between Sanders and Hysham, Montana. Les joined sisters Terilynn and Karen with Stacey arriving later. In 1968, the family relocated to Melstone and Les grew up there. Small town ethics and values remained with him his entire life. Les’s greatest strength and greatest weakness were the same–he always tried to help anyone that needed it and sometimes got behind on the jobs he had scheduled (which caused many late nights and weekends working at the shop trying to catch up). Les always tried to make certain people got the best price for the best part and took great pride in that.

Les’s dad, Charles, initially worked in the oil field and then bought the repair shop in Melstone, Charley’s Service. Les grew up as a third-generation mechanic (after his grandfather and father). All was not work, though, and Les was even a cheerleader for the girls’ basketball team in high school, as well as playing basketball himself. He was state champion for VICA winning gold medals three years in a row in auto mechanics. He also went to nationals three years in a row ranking in the top 25.

Vehicles always played a major role in Les’s life. He and a friend made a trip to Glendive in 1979 in his Plymouth Barracuda. Les was rolling around on the hood and being silly when a car with two girls stopped–one being Shannon. One thing led to another and they dated for a year, getting married June 7, 1980. Together, they lived several places, including Roundup, Forsyth (twice), and the Portland/Vancouver area. The one constant was that Les was always a mechanic. Finally, the family moved to Miles City in January 1998 and Les went to work for Mac’s Frontierland. In 2010, he opened his own shop, Les’s Repair. Les was proud of being a Senior Master Technician for Ford and even won a cruise from Ford. Sadly, the cruise wasn’t as much fun as it could have been due to rough seas and seasickness.

During these years, the family grew, first with the addition of Josh, then Kirsten, and finally, Hunter. Les loved loading up the RV and having family adventures–whether to visit relatives, new places, or to go boating. Second only to his love of family, was his love of and special talent with vehicles (especially Fords). Les was especially proud of his 1993 Ford F-150 Lightning and his 1965 Ford Fairlane. He enjoyed participating in or watching drag racing. Les was known for his sense of humor and being able to come up with a joke or smart remark for just about any situation.

Les was preceded in death by his parents and many other family members, including uncles and aunts. He is survived by his wife, Shannon; his children, Josh, Kirsten, and Hunter; his sisters Terilynn, Karen (Ken), and Stacey; as well as nieces, nephews, cousins and other relatives. Les was especially close to his cousin, Rose, and his aunt Louise. Les also leaves behind many friends.

A memorial service is currently being planned for Spring 2022. If desired, memorials can be made to the charity of your choice.

Condolences may be sent to the family by visiting: www.stevensonandsons.com .