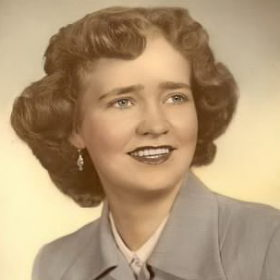 Mary Pauline Eide (88) was born to parents Fritjof “Fritz” & Agnes (Peterson) Eide in Vining, MN on December 23, 1934. She was delivered at home, during a blizzard, by her paternal grandmother Petra (Lund) Eide. She joined siblings Arnold and Corinne and was followed by Margaret, Janet and Raymond “Butch”. She attended school in St. Paul, MN.

She met and married Eugene Matejovsky in Wolf Point, MT in 1954. To this union came a daughter, Shirley, and two sons Gene and Neal. In 1961 she married Robert Purvis of Froid, MT. A union that brought another daughter, Debbie and three more sons Rob, David, and Tom. In 1981, she married Steve Giles of AZ. Mary passed away at the age of 88 on January 23, 2023 in Miles City, MT.

Besides being a mother (7 kids in 10 years), she also worked numerous years as a waitress and bartender. Her first job was as a waitress at the State Line Club near Bainville MT. This job enabled her to proudly buy her first car, a big ‘ol Buick, when she was just 19 years old. She also took pride in being one of the best bartenders around. She served patrons many years at The Triangle Night Club in Sidney MT, as well as many other places along her journey.

Mary had a good life which allowed her to live in 12 different states: MN, MT, ND, WY, CO, NM, AK, TX, WA, KS, OK and AZ. With a smile on her face, a laid back attitude, and a sense of adventure she spent 3 months living in a pop up trailer with her husband Bob and 6 of the children in Fairbanks, AK (she said that little to no housework suited her just fine).

She was a strong woman. When she was raising her children, Mary had a huge garden whenever she could. Her garden always grew abundantly thanks to her green thumb. Her hobbies included reading, fishing, sewing, knitting, crafting, and crocheting. Later in life she took up cross stitch, finishing and gifting more beautiful pictures than can be counted.

A Celebration of Life will be held at a later date.