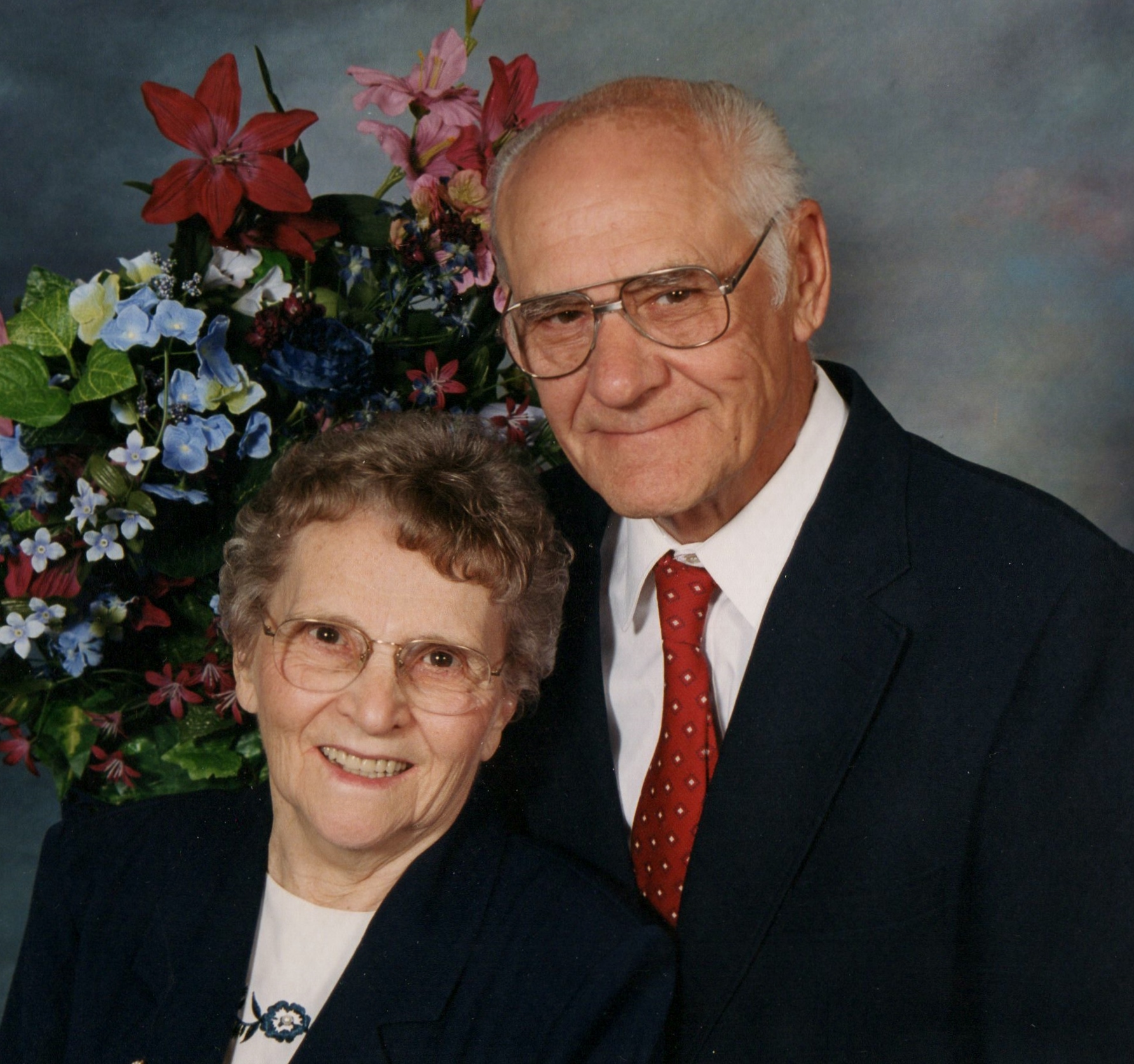 Raymond Schmidt, Sr., ended his busy 90 years on Jan. 3, 2013, following a brief illness. His wife, Marie, 89, passed a mere 85 hours later on Jan. 7, also after a short illness.  Former residents of Dickinson, N.D., and Miles City and Laurel, Mont., Ray and Marie left us as they had wished—in their own home in Richland, Wash., in the presence of their loving family.

Ray was born on the plains of North Dakota to George and Barbara Schmidt on June 17, 1922.  His early years were spent on the family farm near Fayette, N.D., and he remained a farmer at heart for the rest of his life. Due to economic conditions, his formal education ended with his 8th-grade year.  He nonetheless remained an avid learner throughout his life and was self-taught in many areas.  He often said he was an honor graduate of the finest university available: The School of Hard Knocks. In his youth, he served in the Civilian Conservation Corps (CCC) helping to build Roosevelt National Park in Western North Dakota.

Ray met his wife at the age of 14 in a friendly showdown in which she became a regional spelling-bee champion.  She so impressed him at the bee that he tracked her down years later by buying a newspaper ad seeking her whereabouts. They married June 4, 1946, and began a faithful 66-year journey through richer, poorer, sickness, and health.

Before moving to Montana in 1964, to own and operate Dairy Queens and other restaurants, Ray worked as a mail carrier and a master carpenter. In Miles City, he belonged to the Knights of Columbus and was a longtime member of Sacred Heart Catholic Church in Miles City.

Ray was an accomplished, self-taught accordionist who played by ear. Music was one of the great joys of his life. He played his first gig at age 10 and played with a number of bands thereafter. He continued to play for his own enjoyment throughout his life.  After suffering a stroke this past Christmas morning, Ray had difficultly talking, reading, and writing, but he could still play the accordion.

An accomplished woodcraftsman, Ray was often found in his carpenter’s apron, liberally sprinkled with sawdust, whistling away as he measured, sawed and nailed. He was a friendly man of great wit and humor and a natural storyteller. In 2010 he wrote his memoirs as a Christmas gift to his family, which he recently published digitally on Amazon.com under the title From the Farm to Fast Food: My Adventures During the Great Depression and Beyond. Ironically the print version of the book became available on Amazon the morning following his passing.

Marie was the eldest daughter of Barbara and Frank Commes. She was born April 12, 1923, in Richardton, N.D. In her youth, she attended Assumption Abbey in Richardton, and was a devout Catholic her entire life.

Marie was good at everything she set her mind to. She was the first person in her family to attend college, graduated with a teaching degree, and taught at a number of country schools in Western North Dakota.  She was such a gifted, exceptional teacher that she was assigned to the schools with the “toughest customers” (kids), for which she was paid a premium (hazard pay, of sorts). Marie immediately put all of them on the path to learning and good citizenship.

Marie was also good at cooking, baking, sewing, gardening, crocheting, quilting, and—last but not least—raising her and Ray’s children. She and Ray eventually had eight of them join them for their journey.  Although Ray had gone to the “School of Hard Knocks,” she was determined they send all of their children to college, which they did.

Marie worked tirelessly by Ray’s side farming and in the restaurant business. She was also a member of the Sacred Heart Catholic Church. In her retirement, she was a member of the parish’s altar society. She looked after neighbors when they were elderly and cared for her mother in her later years.

Ray was preceded in death by his parents, his sisters Marian and Magdalen and his brothers Jerome and Philip. The patriarch of a large close-knit family, he and Marie will be missed by Ray’s surviving sisters and brothers and their spouses:  Rose (John) Anderson, Tillie Mullen, Jenny (George) Rice, Roselle Schmidt, Florian Schmidt, Andy (Joan) Schmidt, George (Liz) Schmidt, and Matt (Maria) Schmidt.

Marie was preceded in death by husband, her parents, and sisters and brothers Rosalie Heagle, Evelyn Samson, Kathleen Gleich, Norbert Commes, and Frank Commes, Jr. She and Ray will be missed by Marie’s surviving sister, Ramona Ames, and her husband, Robert, of Goldsboro, N.C.; and their brother-in-law Pius Gleich of Helena, Mont.

Both Ray and Marie are survived by their children: Ray (Terri) Schmidt of Miles City, Mont.; Cindy (Kevin) Klein, Mary (Steven) Kincaid, and Julie (Nick) Grubich of the Tri-Cities in Washington state; Rita Atkinson of Laurel, Mont.; Lucy (Dana) Kruse of Seattle, Wash.; Tom (Penny) Schmidt of Lompoc, Calif.; and Amy (Mike) Ray of Fort Worth, Texas. Ray and Marie are also survived by 16 much-loved grandchildren and 16 great grandchildren and will be remembered by a host of friends and extended family members.

Theirs were lives well and fully lived.  Godspeed Dad/Gramps. Since Mom/Grandma did not drive, we trust you safely chauffeured her to heaven.

Per their request, no funeral services will be held for Ray and Marie. Eventually they will be interred in a small country cemetery on the North Dakota plains they loved so much.  Any donations you wish to send can be made out to the benefit of Sacred Heart Catholic Church in Miles City. Or, in lieu of donations, simply do something today for someone in need in Ray and Marie’s honor.