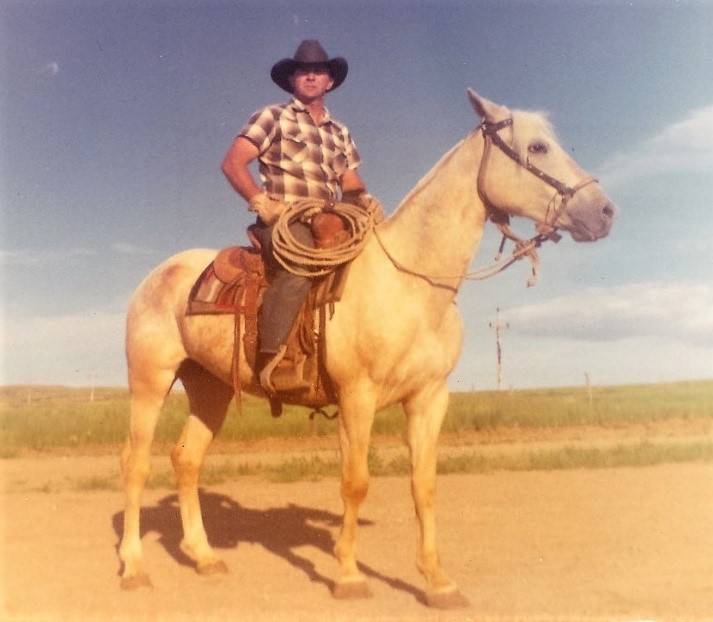 In the early morning hours of June 3rd, 2021, Ray passed peacefully in his sleep after a brave battle with cancer.  Ray was being cared for by Doris, his wife of 71 years, and Clint, his oldest son while also receiving hospice care which allowed him to remain in his home in Miles City.

Ray was born at the family farm at Snowden, MT on July 5th, 1930 to Martin and Frances (Bjelland) Halvorson. He joined grandparents, Ole and Amelia (Fierstein) Bjelland, Uncle John Halvorson, and siblings, Oliver, Millie, Ella, and Louise. He would soon be joined by his little sisters, Margaret and Marilyn.

Early life at the farm had Ray learning the values of family, hard work and good times. He also started to cultivate a life-long love of horses and nature. He started his formal education at Fort Union, and continuing on to Bainville when they closed the old Mondak school. He drove the school bus carrying the other kids from Mondak and Snowden to Bainville while attending high school.

During his late teen years, Ray worked for various farms and ranches around the Bainville area, especially during harvest when he contracted out with a team of horses and his dad’s hayrack to bring in the wheat. He had already started breaking horses to ride, an activity he enjoyed for the rest of his life.

During a foray across the Snowden Bridge to a dance at “Dreamland”, south of Fairview, Ray met Doris Mae Seliger, his future wife. The buildings are still there but it is no longer called Dreamland and they no longer promote romance but sell fresh produce!

Ray and Doris were married on June 28th, 1949 beginning a long journey together. Ray worked for both the Romos and Wilsons while Doris began creating a home. They went to work for Ben Nordell at Mondak, living in a small travel trailer. It was hot in the summer and cold in the winter. They soon moved up to the McNary house on the ranch and Ray was soon promoted to ranch foreman, allowing them to move into the big Weinrich house where they soon welcomed Clint into the family with Clay joining in on the fun a few years later.

Ray went to work for Bill Wilson in the early 60’s, where he was fortunate to meet Wayne and Sue Grimsrud. He soon hit a rough stretch of road, went back to work for Nordell, and spent a brutal winter working for Charlie Johnson in Lambert. Every cloud has a silver lining though as their time in Lambert brought them to meet Kenneth and Kay Thornton, becoming life-long friends also.

Then providence struck as Bruce Randall, Sue Grimsrud’s father, suggested that Ray try to get on with the state highway department and then he could eventually get transferred back close to home in Culbertson. So in 1966, the household was packed up and moved to Opheim, MT where Ray learned how to plow 8’ drifts of snow! In 1967, the desired move to Culbertson was realized and Ray and Doris lived there for over 40 years. Many blistering summer days were spent on the asphalt and many cold, miserable nights were spent plowing snow. Sioux Pass was one of his “favorite” places! Ray continued to advance within the ranks of the highway department, eventually retiring as foreman in 1993. Ray formed multitudes of friendships along the way with co-workers in his 27 years with the state.

Ray was active in the community, serving on the City Council and was active in the volunteer fire department. He was a member of the Saddle Club for most of his years, helping run Frontier Days, the Wagon Train, steer ropings and O-Mok-sees.

Ray helped out in a pinch one week and soon was working a second job at CB&F, picking up a little extra spending money, but most of his time was consumed by his love of horses. Training, riding, driving, trading, selling. He was the go-to guy for a hoof trim job or if you needed a dingaling straightened out.

Ray fulfilled his need of being active with horses, cattle and nature by helping many in the area with brandings and working cattle. If there was a chance of getting to rope a calf, he would be there! Many great times were had at various ranches….Wayne Grimsrud, Bob Traeger, Fred Thompson, Gerald Raaum, Ray Johnson, Shorty Atwood, Louie Vournas, and of course, the Romo Bros., to name a few. He also enjoyed parades, riding with family or driving Doc Reitzel’s black horses with McCann’s stagecoach. Rodeos were also a passion, traveling near and far, to watch. Ray and Doris also worked with Gene Foss on the Foss Cattle Drives, helping city slickers experience the life of a real cowboy.

In 1995, with the death of his brother Oliver, Ray assumed ownership of his beloved badlands. He built fences, corrals and drilled wells, working on improving the old home place. He was very proud of the small herd of Herefords that he developed.

In 2008, Ray and Doris decided it was time to downsize so an auction was held and they sold their Culbertson property, moving to Miles City, MT. They proceeded to build their first “brand-new” house as they approached their 80’s. Ray continued to stay active with his new shop and lots of yard work to do, even bringing young cedar saplings from the hills to plant in their new yard.

Ray was proceeded in death by his parents, Martin and Frances Halvorson; siblings, Oliver, Millie, Ella, Louise, Margaret and Marilyn.

Ray is survived by his wife, Doris Mae (Seliger) Halvorson; Sons, Clint (Mary) Halvorson, Clay (Carol) Halvorson; Granddaughters, Amy (Mike) Quigley, Kara (Scotty Brown) Halvorson; and Great Grandson Nyreece Halvorson. He is also survived by the multitudes of nephews and nieces from both the Halvorson and Seliger families who he loved and cared for as though they were his own children.

Ray has requested that no service be held and his ashes be spread up on the top of the badlands down home. Stevenson and Sons of Miles City is assisting the family. Condolences may be sent to stevensonandsons.com or 1717 Main Street, Miles City, MT 59301.