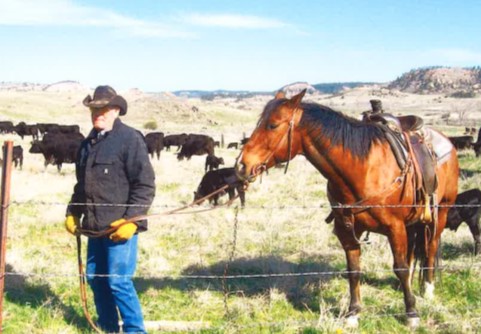 Ross Ridley Denson, Powder River County rancher and lifelong resident of the community, passed away peacefully at the Powder River Manor on October 9, 2022. Ross, the oldest son of Alex and Susie (Borchgrevink) Denson, was born on March 20, 1928, in Deadwood, South Dakota.

He spent his early years on the family ranch at Ranch Creek. In 1941 they moved to the ranch on the Powder River. He attended grade school at the Ranch Creek School and graduated from Broadus High School in 1946. In 1977 Ross and his brother Lex moved to a ranch on Otter Creek. Ultimately Ross and Lex separated the ranch operation, and Ross and Faye operated the ranch with their son Buckshot, until moving to the Powder River Manor in 2021.

On February 1, 1947, Ross married his high school sweetheart Faye Hough, and they raised their three children, Doug, Barb, and Buckshot on the Powder River. Ross was extremely proud of his family and generously invested his time to help his grandkids and great grandkids experience ranch life. His life was also enriched by his strong connections to his friends and neighbors. He looked forward to trading work with his neighbors and team roping in the evenings and on weekends. Ross was a member of the Masonic Lodge for more than seventy years. He served as Worshipful Master in 1962. He especially enjoyed visiting with friends over a cup of coffee usually accompanied by Faye’s chocolate chip cookies.

Any conversation concerning Ross started and ended with ranching. It was what Ross was born to do and happiness for Ross was a day spent moving cows on horseback, swathing hay, and making sure that his cattle were well taken care of in the winter. He took pride in developing his cattle herd and would want to be remembered first and foremost as a stockman.

The family is appreciative of the care Ross received from the staff at the Powder River Manor and of the many friends and relatives who called and visited Ross during his stay there.

Ross was preceded in death by his parents Alex and Susie Denson and his brother Lex and sister-in-law Pearl Denson.

Services will be held at a later date.