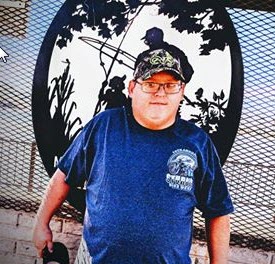 Trent Saylor was born on October 1, 1984, first born son of Charlene Saylor.  Soon he and his Mom were joined by his Father, Mike Fogle and “little” brother Donavon was born in 1988.  Together the little family made their home in Miles City.

During his childhood years, Trent began his lifelong struggle with his physical and mental health.  His loving parents never waivered in their commitment to getting him the best medical care available which required many trips to Billings and several inpatient stays at Billings Clinic Hospital.  Despite the struggles, the family enjoyed visiting family and taking drives around the country. Trent and Donavon spent many hours playing with their cousins Troy and Jesse Saylor and fishing with their grandparents Ronnie and Roxie Saylor.

When Trent’s father became ill and began having dialysis treatments in Billings, Trent and Donavon stayed home with their Mom and helped keep their family home going.  Occasionally the entire family would ride along on those long trips, and they would get the opportunity to visit many of their cousins who lived in the Billings area.

When Trent was ten years old, the family made the decision to move to Billings to be closer to the medical care that Trent and Mike needed.  The family home that they settled into was located right next to Dehler Park where Trent enjoyed helping out the team with collecting flyaway balls and any other chores where he could.  It was at this home that Trent and Donavon began a lifelong relationship with Jeremy Rioux and his family.  Trent was always trying to keep an eye on the two younger boys and keep them out of trouble, and sometimes actually succeeded.

When Trent lost his father due to kidney failure, Trent became even more committed to his family.  He stayed very close to his Mom and helped her in any way he could. Once Donavon became old enough to leave the family home, Trent and Charlene became a team.  They supported each other through thick and thin.  When Charlene’s eyes began to deteriorate, Trent helped her navigate through the streets of Billings.  Trent was always very organized and enjoyed helping Charlene keep track of their schedules, Dr. appointments, medicines and planning trips to Jordan and Miles City.

In 2013 the worst tragedy a family can imagine occurred.  Trent and Charlene lost Donavon and cousin Troy Saylor to a house fire caused by arson.  This event turned their lives completely upside down.  But the strong bond that Trent and Charlene had built helped them piece their life back together and move forward.  Trent went on many fishing trips with cousin Jesse Saylor during this time, and it helped him to heal.

In 2018, Trent and Charlene made the decision to make the move back to Miles City so they could be closer to family in the area.  Their friend Jeremy Rioux made sure they had an upgraded vehicle and helped with the move.  Once settled, Trent began reconnecting with his lifelong friend Allison Campbell and they went on many fishing expeditions in the area.  Fishing was one of the things that Trent loved most in life.  He had plans to enroll as a member of Walleyes Unlimited so he could share experiences with others who had the same passion.

Trent had other strong passions in addition to fishing.  He loved his Dr. Pepper, “big #@!” hamburgers, and popcorn with pepper on it.  He could often be found cooking his favorite foods.  Sports were a huge part of his life.  His favorite teams included the Seattle Mariners, Green Bay Packers, Florida Gators, and University of Montana Grizzlies among others.  There were few sportscasters that knew the statistics of his teams like Trent did.  He so loved teasing his cousins about their teams versus his, including gifting them when his own sports team items.

Trent also had a love for cats.  He didn’t take the easy way of finding an adorable kitten, but instead would go to the pet shelters and find mature cats that were homeless and take them in and love them throughout their remaining lives.

Trent will be forever missed for his kind heart and loyalty to those he loved.  He was a gentle soul who was committed to his family, friends and pets and despite the trials and tribulations, he never once complained.  Rest in peace and enjoy the fishing Trent.

Graveside services will be held at 11:00 am on Friday, August 16th at the family plot in Pioneer Cemetery in Jordan, Montana.  A potluck luncheon will be held at the Senior Citizen Center directly following the services.